This week is Dying Matters Awareness Week. Although in-person events have been temporarily curtailed, the team at Freeman Brothers have blogged on daily topics as set by Hospice UK. Today, Abi and Becky discuss stillbirth and miscarriage... 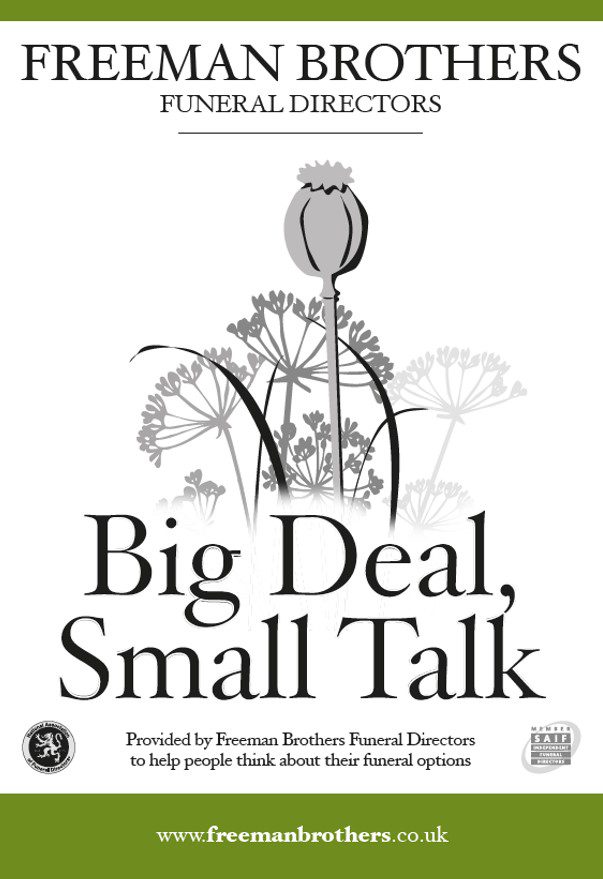 Freeman Brothers has been based in West Sussex since 1855 and this year celebrates 165 years of service to our local communities in Horsham, Billingshurst, Crawley and Hurstpierpoint.  We see our role as funeral directors as not only helping people at their time of bereavement but seeking to be a source of information and advice beforehand.  Dying Matters Awareness Week is an excellent opportunity to do this and we always like to engage with the topics they suggest for the different days of that week.  Today, Manager Abi Pattenden and Community Co-Ordinator Becky Hughes discuss stillbirth and miscarriage.

When discussing objections to having conversations about funerals and planning them, a popular analogy to draw is that we plan for births, and many other life cycle events, but are reticent to plan for deaths.  This takes on a different meaning when the particular topic is the death of someone whose life ended far too soon, or was stillborn.  Births are indeed planned for, and often longed for, and we would never want to encourage someone who is planning for the birth of a baby to also be planning for that baby’s death- it just wouldn’t be appropriate. However, it is a sad reality that sometimes very young babies do die, or are stillborn, and people who know very little about funerals might therefore find an incredibly difficult time to be made even harder through lack of understanding about what is possible for them.

New lives are often associated with hope, dreams and wishes for the future, both for the life of the baby and for those they will know.  Excitement tends to build, and plans are put in place to welcome the new baby, ensuring that their life begins safely and comfortably.  With all of this in mind, it’s no wonder that, when the unthinkable happens, parents have no idea what to do, and are reliant upon advice and support from those around them in order to navigate their new circumstances.

‘The idea of this week’s discussion topics is to cover those deaths which are rarely talked about,’ Becky begins.  ‘I read quite a lot of magazines, both in print and online, and have noticed an increasing number of articles during the last few years about miscarriage and stillbirth stigma, and the difficulty in dealing with these circumstances.

‘During my time at Freeman Brothers, I know that we’ve looked after many stillborn or miscarried babies, as well as those who have died early in their lives.  Last summer, there was one case which I helped with specifically, and it was something I’ll never forget.’

‘Becky called me one afternoon in August when I was working from home,’ Abi continues.  ‘She had received a phone call from the Bereavement Midwife at one of our local hospitals, who was at the home of a couple whose baby had sadly been stillborn a few days previously.’

‘The couple, as many do, had wanted to take their baby home in order to spend some time there together before making further arrangements,’ Becky says.  ‘Unfortunately, when they left hospital, their plans had been unclear, and so fully advising them hadn’t been possible.  In the midst of their grief, they had quickly decided that they wished to bury him in their own garden.’

‘We counsel anyone considering burial on their own property carefully,’ Abi says.  ‘It is really important to consider the future when making this decision: circumstances may change unexpectedly, and you may therefore no longer be able to live in the final resting place of your loved one as you had previously thought. Even if that doesn’t matter to you, the presence of a someone buried within the grounds of a property can unfortunately affect its appeal to future purchasers, which can be of huge significance later. While there are no legal barriers to prevent you burying someone on your own land, the potential implications are often a disincentive and it is often an idea that is had, but then discounted in favour of an alternative.’

In this particular situation, the baby’s parents had, with further consideration, decided that their wishes were for their baby to have a ‘proper’ funeral, and a chance for them to fully process the experience.  Fortunately, thanks to the Bereavement Midwife’s visit and counsel, the parents were able to clarify what they wanted.

‘The Bereavement Midwife called Freeman Brothers as she and I had liaised previously regarding our Big Deal, Small Talk resource,’ Becky says.  ‘I called Abi to discuss the situation: it’s an incredibly sensitive issue and we had to think of the best way to proceed. With the Coroner’s approval, the Bereavement Midwife ultimately assisted the parents in bringing their baby into our care.  Ultimately, his parents chose a specific coffin and arranged a funeral for him, allowing them to plan and prepare their goodbye.

Abi has led the team at Freeman Brothers for almost 13 years, and continued to say: ‘In my experience, part of the reason why people have had unresolved issues around the death or stillbirth of a baby is because other people haven’t wanted to talk about it. People are always worried about upsetting someone by talking about a recent death and this is probably exacerbated with the death of a baby because of the previous excitement that there will have been about his or her arrival.

‘It is quite different to arrange a funeral for a baby. Much of a funeral these days centres around the interests of the individual – songs which they liked are played, and references are made to their character and achievements in the eulogy.  Mourners may dress in their favourite colour, or the coffin and flowers may be selected to reflect this.

‘Difficult as it is, this is possible even with a young child – one who has lived enough to have a favourite TV programme, book, animal or song.  With a baby, none of this is possible, and the existential question of who the funeral is ‘for’ is raised in a very different way.

‘My suggestions to those in this position are very different: it involves thinking about your own beliefs, what you wish to share, and how it might be best for you to process your grief.  There is nothing wrong with having a complete funeral, with readings and music, for a baby- and making such choices may help with the difficulties of processing grief.

There are many practicalities to consider when dealing with the funeral of a baby. Some of these will be the same as anyone else’s funeral- such as the choice of coffin and content of the service. Others are to do with the specifics of taking care of someone small- how we may look after him or her until their funeral service and how the family’s choices (for example, possibly wanting to spend time at home with their baby) can be accommodated. We will always outline the options carefully, but an important consideration will always be that there is no right or wrong- there is nothing that ‘should’ be done.

If you require further information or support following the stillbirth or death of a baby, you can find more via SANDS and Aching Arms.