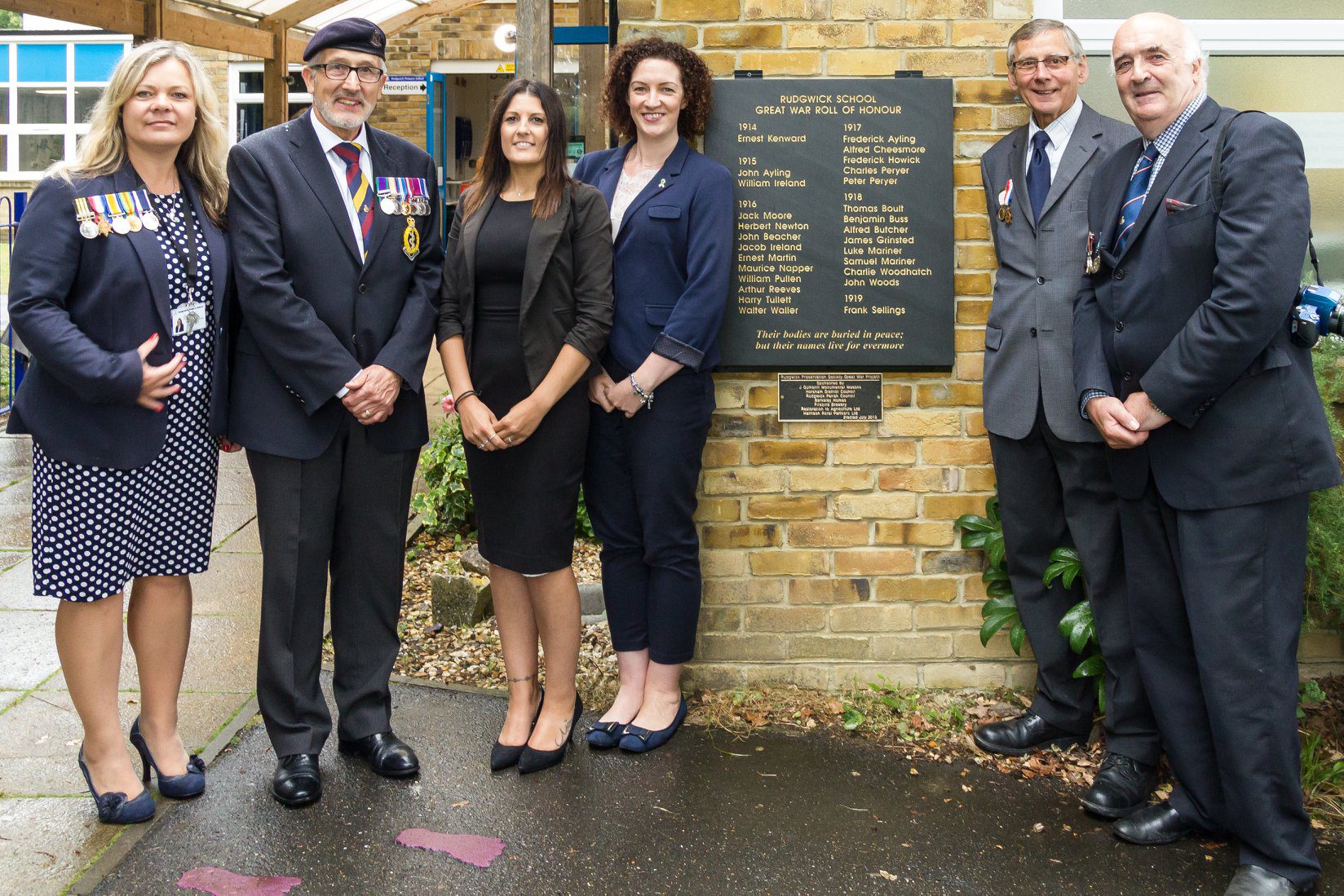 Freeman Brothers Funeral Directors has been operating in Horsham since 1855.  During this time, the company has expanded across West Sussex, with offices now also in Billingshurst, Crawley and Hurstpierpoint.  Having supported the community for over 160 years in terms of funeral provision, the company is also keen to work with local groups in a wider sense, and regularly engages with community projects in order to achieve this.

Recently, Freeman Brothers has collaborated with sister company, J. Gumbrill, to provide a memorial plaque for Rudgwick Primary School.  Community Co-Ordinator, Becky, explains how the project came about, and what went into making it happen…

I was first made aware of Rudgwick Preservation Society’s project to commemorate former-pupils of Rudgwick Primary School when I received a phone call from Martin King, Vicar of Rudgwick.  Martin ran me through the details of the project and asked whether it was something which Freeman Brothers and I would be able to help with, to which the answer was yes!  He put me in touch with Roger Nash, who had initiated plans to recognise those former pupils of Rudgwick Primary School who had died during World War One, for us to liaise regarding the support which would be available.

Roger explained that he had done an extensive amount of research, and that sales of his books on Rudgwick during the Great War were being used to fund a memorial.  Sponsorship was also being sought from a variety of local organisations.  Due to Freeman Brothers operating a sister company, J. Gumbrill, it was decided that resources would be pooled in order to assist with the memorial being put in place.  I arranged a meeting between Roger, Selina Nicholls (Headteacher of Rudgwick Primary School), Annissa (my colleague, whose role involves sales and administration of J. Gumbrill) and myself, in order to discuss what would be appropriate.

I was really pleased to be approached about this project.  During 2018, I organised an extensive campaign for Freeman Brothers, commemorating the centenary of the end of World War One, and had been keen to get involved with the restoration or installation of a memorial, but hadn’t been able to find a project which required our support.  It’s funny how these things happen though, as this one became a possibility thanks to increased awareness of my role within the community.

The meeting took place in January 2019, and Roger presented Annissa and myself with a list of the names of those who had died, and gave an overview of his research.  Selina explained that there were a couple of options for where to site the memorial, and that it was likely to be positioned outside.  Based on this information, Annissa made some recommendations regarding the size and style of the stone.  It was really interesting for me to be involved with this meeting – although I’ve worked alongside Annissa for almost two years, I hadn’t sat in on one of her appointments with a customer previously, and wasn’t aware of the level of detail involved in ordering a stone.

The majority of Annissa’s work involves organising headstone and tablet memorials for churchyards and cemeteries – she meets with customers who are enquiring about new stones, or additions to existing ones, then liaises with our contracted letter cutters and stone suppliers in order to confirm a quotation and design.  She then orders the required stone, and ensures that the engraving is on track for it then to be fitted by another member of the team, before informing the customer that the work is complete.  The work can take several months from the design being signed off through to completion, as the stone often has to be ordered from other countries, and transporting it takes time.

Annissa’s expertise enabled her to recommend a stone which would be large enough to contain the required information, but also suit the available space.  As it would be fitted to a wall, it was important that it wasn’t going to be too heavy, for example!  The group also discussed fonts at length, as it was preferable that the finished stone would be easy for current pupils at the school to read.

With the design of the stone and a dedication plaque to go beneath it agreed, the stone was ordered and the letter cutters set to work.  Whilst the stone was being prepared, a dedication event was planned to be held at the school prior to the end of the summer term.

Once the stone was finished, J. Gumbrill’s fitters visited the school in order to attach the stone in position.  The children had helped choose the final site: Rudgwick Primary School has a memorial garden, which is a quiet place pupils are invited to spend time in if they are struggling with the loss of a person or pet.  There’s a pole to which they are offered the opportunity to attach a brightly coloured ribbon, in order to mark the memory of their loved one.  It’s on the wall facing this garden upon which the memorial stone has been positioned, in a fitting tribute.  I find the idea of a space such as this garden to be very forward-thinking, particularly in Primary Schools – many schools struggle to find the best way to assist pupils with bereavement, and understanding death, as well as supporting their peers, and this is a great initiative to assist with that.

With the stone in place, and guests invited, everyone was ready for it to be unveiled… and so was the Great British Summer!  Following several weeks of beautiful weather, the afternoon on which the event was held was appropriately rainy.  A variety of guests attended, from those who had sponsored the memorial, to relatives of those commemorated, or who were residents of Rudgwick during the Great War.

Despite the inclement conditions, the school put on a fantastic event.  Headteacher Selina Nicholls kicked the event off with an introduction to those present, including two groups of pupils – one group were participating as they undertake singing as an extracurricular activity, and would be entertaining us, and the other group were present due to their contributions to the school’s memorial garden.  Following a speech from Roger regarding his research, and two songs from the children, the memorial was unveiled by the school’s Head Girl and Head Boy, then dedicated by Revered Roy McAllen.

We were then invited to enjoy some refreshments, enabling the children to demonstrate their excellent hospitality skills!  This was also a chance for the guests to come together and learn about each other: one of the invited guests was a relative of the very first Headteacher of Rudgwick Primary School, and had brought with him some memorabilia.  I also took the opportunity to present Selina with an additional gift for the school’s pupils: we had some of our packs of poppy seeds remaining having used them as giveaways during 2018.  Happily, there were enough remaining in order to offer a pack to every pupil at the school, plus for members of staff.

Annissa and I were pleased to be invited to the event, and enjoyed seeing the fruits of our labour be unveiled and enjoyed by the school.  Hopefully, it serves as a fitting reminder for many years to come.

If you know of an organisation within the communities local to our Billingshurst, Crawley, Horsham or Hurstpierpoint offices which we could support, do get in touch and let us know!  The team are always keen to hear from new groups, and are happy to discuss all kinds of opportunities.