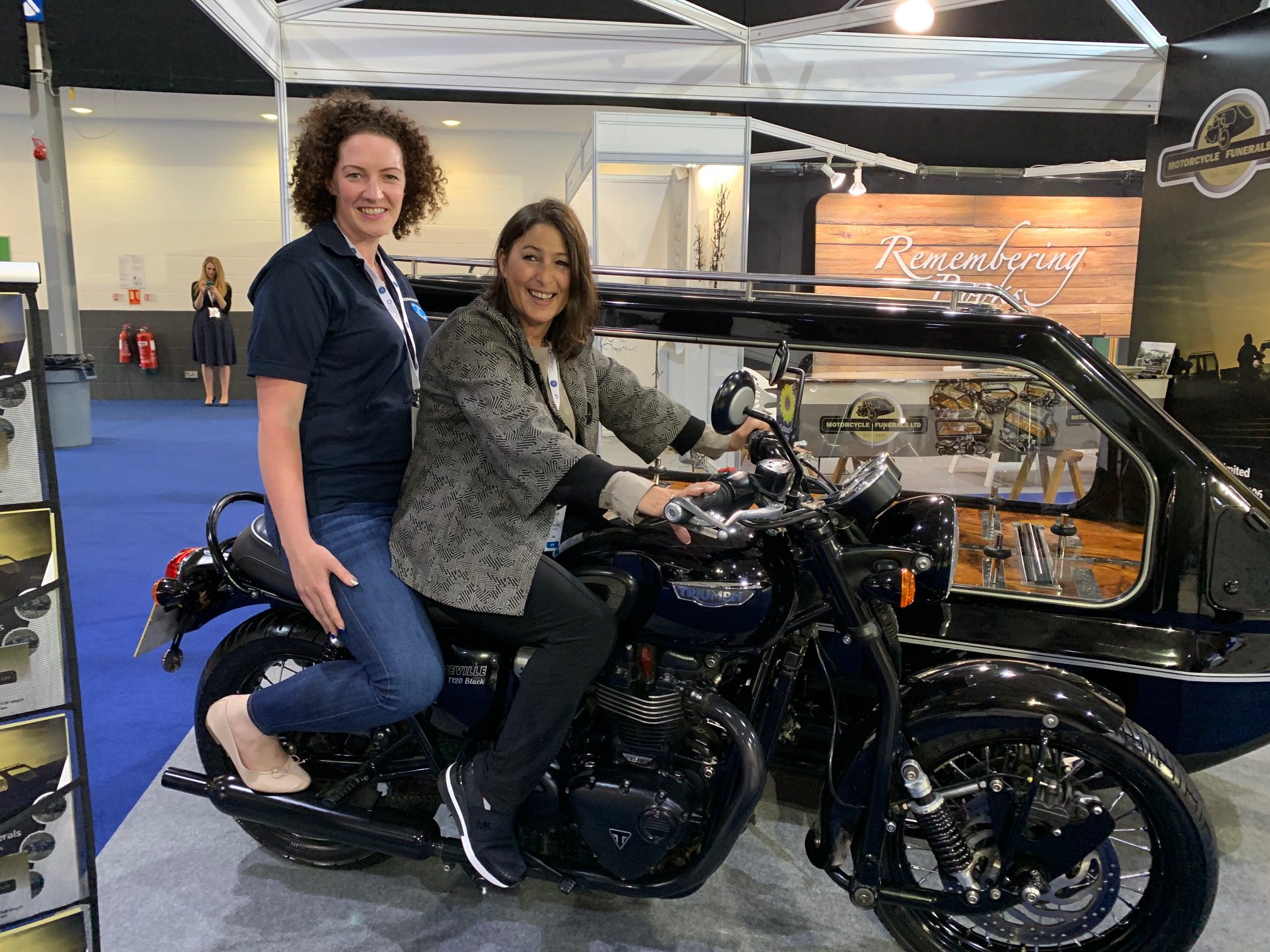 One of Chrissie’s favourite moments so far: trying out a motorcycle hearse at the National Funeral Exhibition in June, with Community Co-Ordinator Becky

The roles within a funeral directors are more diverse than you may think!  A lot has changed since Freeman Brothers first began in 1855.  With branches across West Sussex in Billingshurst, Crawley, Horsham and Hurstpierpoint, our workforce comprises of 28 staff, most of whom are employed full-time and some who are on part-time or flexible basis.  Some of our team members have worked for the company for a number of years, and others have joined more recently.  As the business continues to grow, and the funeral industry changes, we are required to be increasingly innovative, and this means even more variety among roles and responsibilities.  Now’s your chance to meet the team!

Today we’ve profiled Funeral Arranger and Community Co-Ordinator, Chrissie Wilkie, who works in our Hurstpierpoint branch and has a wealth of experience to share…

How long have you worked at Freeman Brothers? It was a year on 19th November to be exact, the year has whizzed past, but I’m still standing!

What did you do prior to working at Freeman Brothers? I have spent a huge part of my career, since the age of 30, self-employed, starting and running new businesses within the care and retail sector, before deciding to sell them as going concerns and moving on. I think I’ve unofficially retired twice, before realising I love to work. Before that, I worked for Caledonian Airways and Virgin and spent a lot of time travelling the world. I have such a diverse CV it’s a little crazy to break it down. Needless to say, I welcome change and love challenges.

What made you want to work at a funeral directors? I followed my heart – I always knew that I wanted to go back to the care profession, but it had to be with the right company. I won’t compromise my values, and Freeman Brothers seemed to fit perfectly.

When the role was initially advertised, I kept picking the advert up and putting it down again, but kept going back and re-reading it, thinking long and hard as to whether I could give the role the time and devotion it deserved. Everything kind of fell into place and I think I’m definitely where I’m meant to be at this point in my life – maybe having such a diverse career has stood me in good stead for being able to become involved in peoples’ lives at such a crucial time.  Being able to put myself in their shoes and offer them the care and support that they need. You only get one life, so doing it well and making a difference is important to me.

Describe your role for those who may not know what it involves… Hmmm Funeral Arranger, Community Co-ordinator, Office manager, good coffee maker … the list seems to be endless.  Freeman Brothers is a family-run company, so it’s not a jobs-worth role, you have to be willing to adapt and to work as part of a team.  I am based in our newest branch in Hurstpierpoint and my fundamental responsibilities see me engaging with families to help arrange funerals, whether that’s at any one of our four branches. I am also responsible for the community work at Hurst, liaising and helping within the community and with local charities.

What’s your favourite part of your job? Not knowing what to expect from one day to another, every day is different, every funeral is different. I really enjoy the client interaction. Being able to focus on a family, and to lead them through the various stages of the funeral arrangement. Teasing out information that the family wouldn’t necessary think important, but knowing that this could provide them with the funeral service that they are inadvertently looking for.

Basically everything! Well maybe not writing policies and procedures.

If you could help people to understood one thing about your job/funerals, what would it be? We are now in the 21st century, funerals have changed. We are not in the Dickensian times, where undertakers would come and measure you up for your coffin, cloaked in dark and surrounded in mystery. Today, you are more likely to find that we are extremely open, approachable, caring human beings, just like you, working from light, airy and peaceful branches.

Has your job changed your own approach to discussing death, dying and bereavement outside of work? I lost my mum when I was 30, and this job only serves to reinforce that you shouldn’t be afraid of facing life head on and living for the moment.  Nothing helps you enjoy the present more than excepting the end. Or as Woody Allen put it, “You can live to be a hundred if you give up all the things that make you want to live to be a hundred”

It’s always difficult to tell people what you do for a job and it’s quite interesting to see their initial reaction, but once their shock passes, most people are naturally curious to find out more.  If some good can come out of being open, and having a discussion on death, dying and bereavement, then it’s a good thing.

What’s the biggest change you’ve seen in the funeral industry whilst you’ve worked at Freeman Brothers? I’ve not really had an awful lot of time in this role to compare and contrast, but I can tell you with 100% certainty, not every Funeral Directors is the same.  In an industry which is not regulated, I would certainly be asking lots of key questions before I used a Funeral Directors. I was astonished to find that many were no more than shop fronts.

What do you think funerals will be like in 20 years’ time? That’s a great question, I’d like to think that there would be funeral planners, a time where death could really be celebrated and that people could shrug off tradition if they wanted, without recrimination. No need to conform.

I predict that people will start to see the importance of making plans and provision ahead of time to ensure that their funeral is befitting. It will become just as important as investing in good dentistry or having regular check-ups with your doctor or planning your perfect wedding.

I am also extremely interested to see if the UK Government will eventually approve a new method of cremation, called Resomation, which is an alternative to burial or fire cremations.  The process uses a mixture of water and potassium hydroxide, to create a ‘water’ cremation that is gentler and a more environmentally friendly option.

Eventually, the availability of burial plots will become extremely difficult to purchase, not to mention expensive.  Two London boroughs have already stopped providing burials in their boroughs altogether, so Resomation, may well be the solution and alternative that people turn to in the future.

Which songs would you like to be played at your funeral/memorial? Needless to say, my funeral is completely planned from start to finish. My final fanfare will be just as I want it, it’s just a shame I won’t be there to see it.

I have a real love of music and an eclectic taste, there could be friend’s salsa dancing in the aisle, my partners gospel group singing an Elvis song, it constantly changes, you’re just have to wait and see!

One constant thing that will remain, is that I have requested that everyone sing ‘O Holy Night’ no matter what time of year.  It’s one of the most amazing, spine chilling songs and I don’t care if it’s considered a Christmas only song, bring on the heat wave.

Chrissie loves meeting new people – if you’re passing our Hurstpierpoint branch, pop in and she’ll happily supply you with a coffee and a chat!