Originally written for the West Sussex County Times, this piece is the culmination of our commemoration of the 100th anniversary of the end of World War One 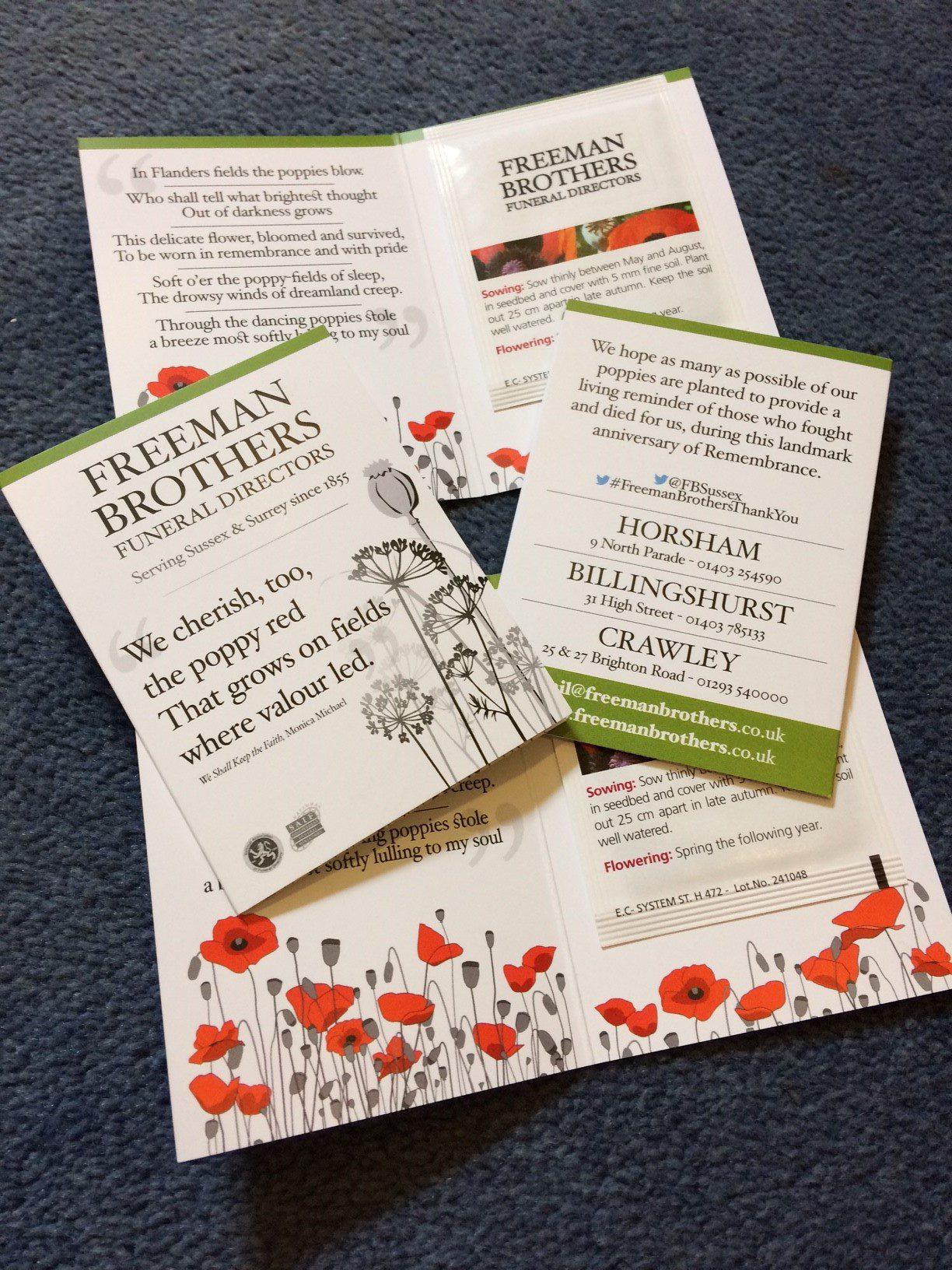 As the 100th anniversary of the end of World War I approaches, Freeman Brothers has participated in the Royal British Legion’s Every One Remembered campaign – an initiative put in place to ensure that every person who lost their life in service during the war is remembered. Visitors to the Every One Remembered website have the opportunity to leave a message in remembrance of someone who died, with more than one million service personnel listed.

The team at Freeman Brothers searched the Every One Remembered site for namesakes of themselves and other family members, and selected those with similar names to their own to remember. These people are listed within these pages, in addition to having been mentioned on Freeman Brothers’ Twitter account – one person on each day during the 100 days leading to 11 November. In addition to searching for names linked to our organisation – you may notice that Freeman itself is remembered on several occasions – the team looked up the names of those commemorated on local war memorials and, where possible, recognised the exact match.

Community Co-Ordinator Becky explains more: “I was particularly moved to discover that one soldier on the Partridge Green war memorial had actually made it back to the UK, having been injured late in the war. Sadly, he died in January 1919, though he is buried in the churchyard where he not only worshipped, but was a bell ringer. To be able to recognise people with particularly close links to the local community is great, and allows us to remember their stories and their lives prior to the war.”

When the war started in 1914, the government relied upon volunteers signing up, with those already enlisted providing training for them. The initial response in the local area was overwhelming, with the West Sussex County Times reporting in September 1914 that the HQ of the 4th Battalion of the Royal Sussex Regiment (in Horsham’s Park Street) was ‘totally inadequate to meet anything like the demands’ of those wishing to enlist. This enthusiasm waned as the war continued, though, and with fatalities quickly exceeding what had been anticipated, it soon became apparent that an alternative method of recruiting would need to be found.

Conscription became a political issue. The Cabinet’s only Labour member, Arthur Henderson, argued the likelihood of many working class men resenting being forced into service for a government they didn’t vote for. At this point in time, voting was limited to certain members of the population, and working class men were not eligible. When conscription was implemented in 1916, Henderson’s assertion was proven correct: by July 1916, 30% of those called to enlist had failed to appear, leading the authorities to round up men who looked as though they were in the demographic required to enlist. Initially, all single men and childless widowers between the ages of 18 and 41 were required to enlist, with some exemptions being imposed for those considered to be undertaking work of national importance. Married men were soon added to those being conscripted. By April 1918, the conscription age was raised to 50 and, in some cases, 56.

It was particularly striking to the Freeman Brothers team that, were we to be operating then with today’s workforce, by the end of the war, half of our staff – all of our full-time male employees – would have been conscripted. This put the war into perspective for us all, and gave us pause for thought when reflecting upon the names listed here – some of which are similar to the names of our colleagues today, due to choosing names which relate to our families. We wonder how many of these 100 people listed chose to go to war, or were conscripted. Some may, of course, have already been in military service, but many would have been required to sign up simply due to their age.

Conscription was an issue which strongly divided communities – Sylvia Pankhurst was pelted with fruit and vegetables on a visit to Horsham when she tried to campaign against the Military Acts which enforced it. Many women who were part of the suffrage movement chose to support military recruitment by handing out white feathers to those they believed by sight ought to have signed up. This led to many serious assaults, to the extent that it became necessary to issue official badges to those who had previously been honourably discharged.

We have also thought about the women and older men left behind to keep working and keep the country together – such as female factory workers and farmers – and we think of them too with grateful thanks. The war was a time of sacrifice we can only imagine by society as a whole – whether  volunteer or conscripted servicemen, and by those left behind – and we Remember them with thanks and pride.

Throughout the year, we have marked Remembrance in a variety of ways. We produced special packs of poppies, which were given away at events in addition to being offered to our customers. Some were also donated to St Catherine’s Hospice in Crawley for the Therapies Team to plant with patients. We also supported the Billingshurst Royal British Legion with a cash donation to help fund their delegation’s participation in GP90 during the summer – a pilgrimage to honour an event which took place to mark ten years since the end of the war.

On Remembrance Day itself, our team will be paying their respects at parades in Horsham, Crawley and Billingshurst, and laying wreaths in a traditional tribute to those who died during the conflict. At the going down of the sun and in the morning, we will remember them. Thank you.