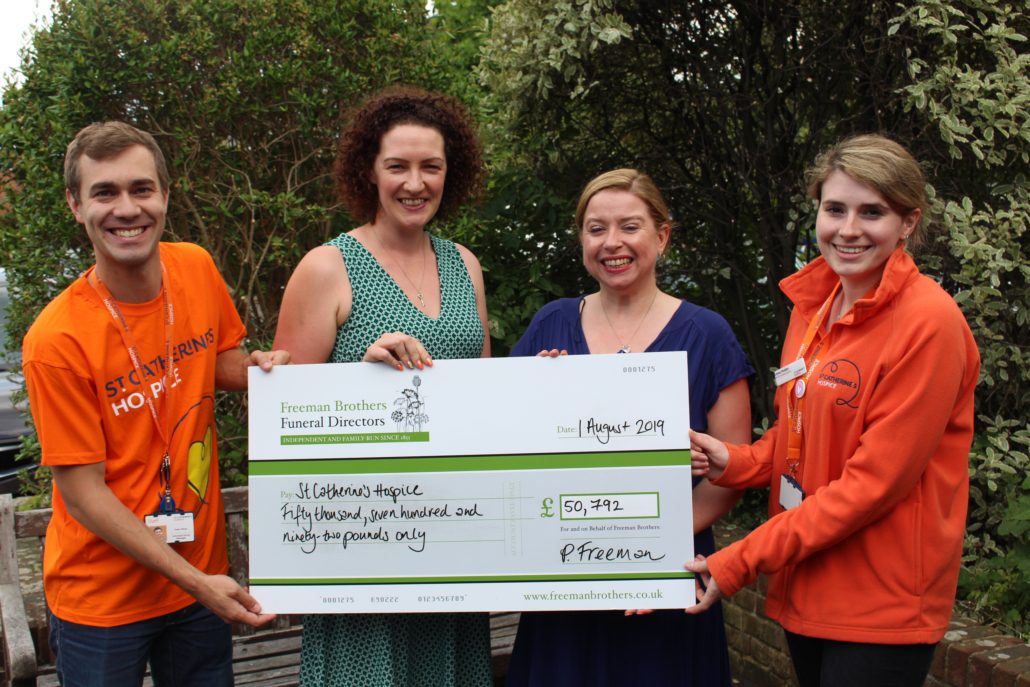 Freeman Brothers Funeral Directors is delighted to announce the success of its online donations platform as the service passes its first birthday. Since the service was introduced in August 2018, staff at our branches in Billingshurst, Crawley and Horsham have been working with customers to create online tribute pages. Ensuring staff at our new Hurstpierpoint office, which opened in February, were also able to offer this to their clients was a top priority. The company very much views this new development as another step in its continuing desire to evolve and improve, giving the bereaved families we care for across Sussex and Surrey the very best level of care at their time of need.

Freeman Brothers has always been a business that responds to client feedback in considering the services it offers. Last year, the decision to start collecting charitable donations online was suggested after staff noticed it was something which was being asked with increasing regularity. We had always had a few customers who were interested in this kind of service, but typically they had already set a page up themselves. However, we noticed this was changing during 2018.

Manager Abi Pattenden explains: ‘A few years ago, people didn’t seem to like the idea of donating online and were happiest to send us a cheque for the charity. A few clients would set up their own online pages but these seemed to be mixed in terms of success. However, in the last couple of years, there has been a real explosion in online activity of all types. People are using the internet in ways we wouldn’t have thought possible a few years ago, and more and more people are willing to enter into financial arrangements of all kinds online. Our clientele was starting asking us if there was a way we could reflect that. We knew there were several different platforms available, all with slightly different offers, so we had to choose something that we thought would be right for our customers. After a lot of research, we chose to partner with MuchLoved. It appealed to us that they were a charity – in fact they were established exactly for the purpose of online tribute pages. The online platform we have built in to our website not only collects donations but also enables the friends and family of the person who has died to create a long-lasting tribute page. These pages can be personalised with photos and music, and visitors to them can leave messages and light candles in memory. I’m delighted to say that the feedback we have received has been overwhelmingly positive and our clients have found the pages both user-friendly and comforting.’

MuchLoved sees online tribute pages as a special way for remembering and celebrating the life of loved ones that have died. Having experienced the sudden death of his brother, founder Jonathan Davies realised the potential benefits for the way online tributes could make the grief process more inclusive and ongoing for a wider group of family, friends and colleagues.

Increasingly these tributes have been set up by families at the time of death in order to share funeral details and invite messages of condolence, life stories and pictures as well as to collect donations in lieu of flowers. Over recent years, more and more people want to respond to a death positively and practically by collecting funeral donations to support the work of a charity or to thank them for their help- and this has also been Freeman Brothers’ experience of the changes ways that people have felt about funerals.

After undergoing extensive training to ensure our staff were fully-equipped to operate this new service, we launched it on 1st August 2018 and the Freeman Brothers team is delighted to announce that, in its first year, a huge £140,889 has been collected for 100 different charities. This is an overwhelming amount of money which will obviously be going to a variety of good causes and we are thrilled that, as a company, we are able to make a difference in this way.

MuchLoved founder and Trustee, Jonathan Davies, feels that the team at Freeman Brothers has really embraced the service. This is very important for the people who are using it to make tributes and donations because they can then fully appreciate the site’s potential and make it work for them in the most appropriate way.

Jonathan explained, ‘Many families tell us setting up an online tribute is a rewarding and therapeutic experience. It’s fantastic that Freeman Brothers has decided to offer online funeral tributes and donations for their families and we’re delighted with the feedback we’ve received from them. It’s been clear that all the team at Freeman Brothers have really taken the tribute service to heart and we’re delighted that it’s made such a positive difference already.  We look forward to helping them continue to offer their families superb bereavement after-care support and help raise more money for good causes in years to come.’

Peter Freeman, proprietor of Freeman Brothers, is delighted at how well the service has taken off. He commented, ‘Although Freeman Brothers continues to accept donations by other means, it is clear that the majority of donations we receive are now being processed via our website. Many people also visit the site without donating but simply to leave a message. This is the real measure of success for us as it shows we made the right decision in choosing a platform which not only collects the funds but allows people the opportunity to leave a meaningful and long-lasting tribute.’

Some of the statistics are extraordinary: As mentioned above, 100 charities have received donations as a result of Freeman Brothers’ new service. The largest charitable recipient was our local hospice, St Catherine’s, currently based in Crawley, which has received over £50,000. Other local charities such as the Phoenix Stroke Club, Age UK (Horsham Branch), and the League of Friends of Horsham Hospital are among other significant beneficiaries along with national charities such as Cancer Research UK. More than 40 charities have received over £500.00 each, but even the smallest amount makes a difference. The amounts mentioned do not allow for the fact that Freeman Brothers is still processing many donations received by cheque or made through collections at funeral services and so the amount we have actually collected for charities in the past year is going to by far exceed this figure.

We spoke to Peter White, Individual Giving Manager at St Catherine’s Hospice about the truly impressive figure raised online by Freeman Brothers. He commented, ‘From the point of view of a donor, having the option to donate online in memory of a loved one is so beneficial. We know how important giving in memory can be for an individual’s own journey with grief, and making this step as easy as possible is a vital service. What’s more, it makes claiming Gift Aid much easier, and in less than one year, more than £50,000 has been donated through Freeman Brothers’ MuchLoved site –  what an amazing year, and we know our donors will be really proud of their contribution.’

Freeman Brothers is proud to mix innovation with tradition and old-fashioned values with modern technology in order to offer the best possible service to our clients at the time when they need us. As our success with MuchLoved shows, when we commit to something, we do so wholeheartedly – and the results can be amazing.

If you would like any information about any of our services, please don’t hesitate to contact us.