Freeman Brothers was first established as a funeral director in Horsham, West Sussex, in 1855. The company remains independent and family-run – currently in the hands of the fifth generation of the Freeman family to operate the business – and now has further offices in Billingshurst, Crawley and Hurstpierpoint. During 2021, HRH Prince Philip’s funeral […] 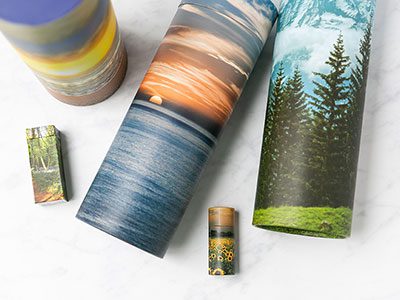 Freeman Brothers was first established as a funeral director in Horsham, West Sussex, in 1855. The company remains independent and family-run – currently in the hands of the fifth generation of the Freeman family to operate the business – and now has further offices in Billingshurst, Crawley and Hurstpierpoint. During 2021, HRH Prince Philip’s funeral attracted much conversation and, as the year ended, there were a couple of other high-profile deaths which meant that public consciousness has again turned to funerals. Becky shares more about a process known as aquamation…

As 2021 drew to a close, there were two high-profile deaths which received a lot of media attention. Betty White, American comedian and television producer, died only a few weeks shy of her 100th birthday – having had a long and illustrious career, she had remained popular among Millennials and Gen Z due to her outspoken nature and forward-thinking attitudes, which meant that she featured in many internet memes. South African anti-apartheid campaigner, Archbishop Desmond Tutu, also died in the same week – he had been incredibly important to many of his compatriots, and there has been a national outpouring of grief and affection following his death. There have also been some intriguing details come to light regarding his funeral wishes, and I thought they were worthy of greater attention.

It’s now been openly reported that Tutu’s wishes were for a simple, low-cost funeral – his specification was for one floral tribute, and the most basic coffin available. These are wishes which are familiar to us as funeral directors, but it is what he wanted following the funeral service that is more unusual: Tutu had specified that his body should be aquamated. Many of us in the funeral industry have been following the development of alternatives to burial and cremation for years, and it is a question increasingly being raised by customers. It’s wonderful to hear of those in the public eye being so candid with their wishes, as it tends to encourage other people to follow their lead, which is of great help to us.

Aquamation – also (albeit mistakenly) referred to as water cremation – is technically known as alkaline hydrolysis. The process takes four to six hours, and involves the Deceased person’s body being put in a pressure vessel, which is filled with a mixture of water and potassium hydroxide. It is then heated, with the pressurised element preventing the solution from boiling. Decomposition then steadily takes place, resulting in a liquid remaining along with softened white bones. The remaining bone is then processed via a cremulator, in order to create ‘ash’, much like the substance obtained following a typical cremation. Both substances can be returned to the funeral’s Applicant – some choose to use the liquid to water a plant (it is regarded as safe for this purpose), and as with cremated remains, there are many options available for the ‘ash’ that results from alkaline hydrolysis.

The process was first developed and legalised in the USA, where legislation differs from State to State. The first State to allow alkaline hydrolysis was Minnesota in 2003, and it is now available in a further 17 States including California, Maryland and Oregon. Alkaline hydrolysis is also permissible in three Canadian Provinces – Quebec, Ontario and Saskatchewan – with the latter being first to adopt it in 2012. Further afield, alkaline hydrolysis is legal in part of Australia, as well as Mexico and South Africa. The process of legalisation is underway in The Netherlands and, unfortunately, at the moment it’s not possible in any part of the UK.

In 2017, one venue in the UK was granted planning permission for an alkaline hydrolysis facility by the local council, however the water board issued an objection, meaning the plans failed. At this point, it’s slightly unclear whether the objection raised is genuinely scientific (meaning that there are serious concerns about the technical disposal of human remains, in terms of the ‘waste product’ produced via alkaline hydrolysis), or more about ethics and morality (as this article also references public acceptability and preference). Five years later, the issue remains unresolved, and the option of alkaline hydrolysis is therefore currently unavailable in the UK.

Alkaline hydrolysis isn’t the only burial or cremation alternative being developed, or available in countries outside of the UK. My own preference – should it be available when I die – is cryomation, which is a similar concept, but involves your body being frozen in liquid nitrogen and then shaken in order to create particle remains. Other options include that which was famously chosen by actor, Luke Perry, a method referred to as ‘human composting’ whereby he was buried in a special item of clothing which allowed fungi to develop and assist in the decomposition process.

A very familiar conversation during my time in the funeral industry has been people expressing a strong preference against either burial or cremation. If I had £1 for every time I’ve heard, ‘I can’t bear the thought of being buried, as I don’t like worms’ (other objections include that people aren’t fond of the dark, or small spaces), and ‘I don’t like the idea of being cremated as I don’t want my body to be burned’, I’d be a rich woman! I think these preferences are entirely valid, as it’s important to us what happens to our bodies after we die, and so for people to express this is a positive for me. It would also be great therefore for further options to be available – I suspect many people who don’t like the idea of being cremated would feel differently about cryomation or aquamation, though I suspect those who aren’t a fan of worms wouldn’t feel any differently about a composting versus traditional burial!

Whilst we wait for more options to become legally available here in the UK, there are practical steps which can be taken in the meantime in order to increase the eco-friendliness of a funeral – Abi has written a great blog on this which is being published in the near future, so do come back and have a read for more ideas. Her thoughts include choices of coffin, and considerations to make for travel among other things. Some of the things she mentioned were also referenced in Tutu’s wishes – he had stated that he wanted the most basic coffin available (avoiding lacquers and materials which aren’t environmentally-friendly), and only one floral tribute (again minimising wastage).

The slight irony in my opinion – although out of his and his family’s control – is the number of people who travelled sometimes great distances in order to pay their respects. This would have an impact environmentally, and is something worth thinking about: whilst some people will always believe that the ‘right’ thing to do is to travel, others may simply be waiting for permission not to and, if advised that an alternative is acceptable, may be willing to take it up. If you are looking to minimise the environmental impact of your own funeral, you may wish to bear in mind that people will look for this kind of reassurance, and be prepared to proactively inform people that you are happy for them not to travel, and offer a suggested ritual or other way to participate remotely.

To learn more about some of our most frequently asked questions, you can visit this section of our website.

← Prev: Community Review of 2021 Next: Caskets and coffins: are they the same? →