New Year’s Resolutions With A Difference 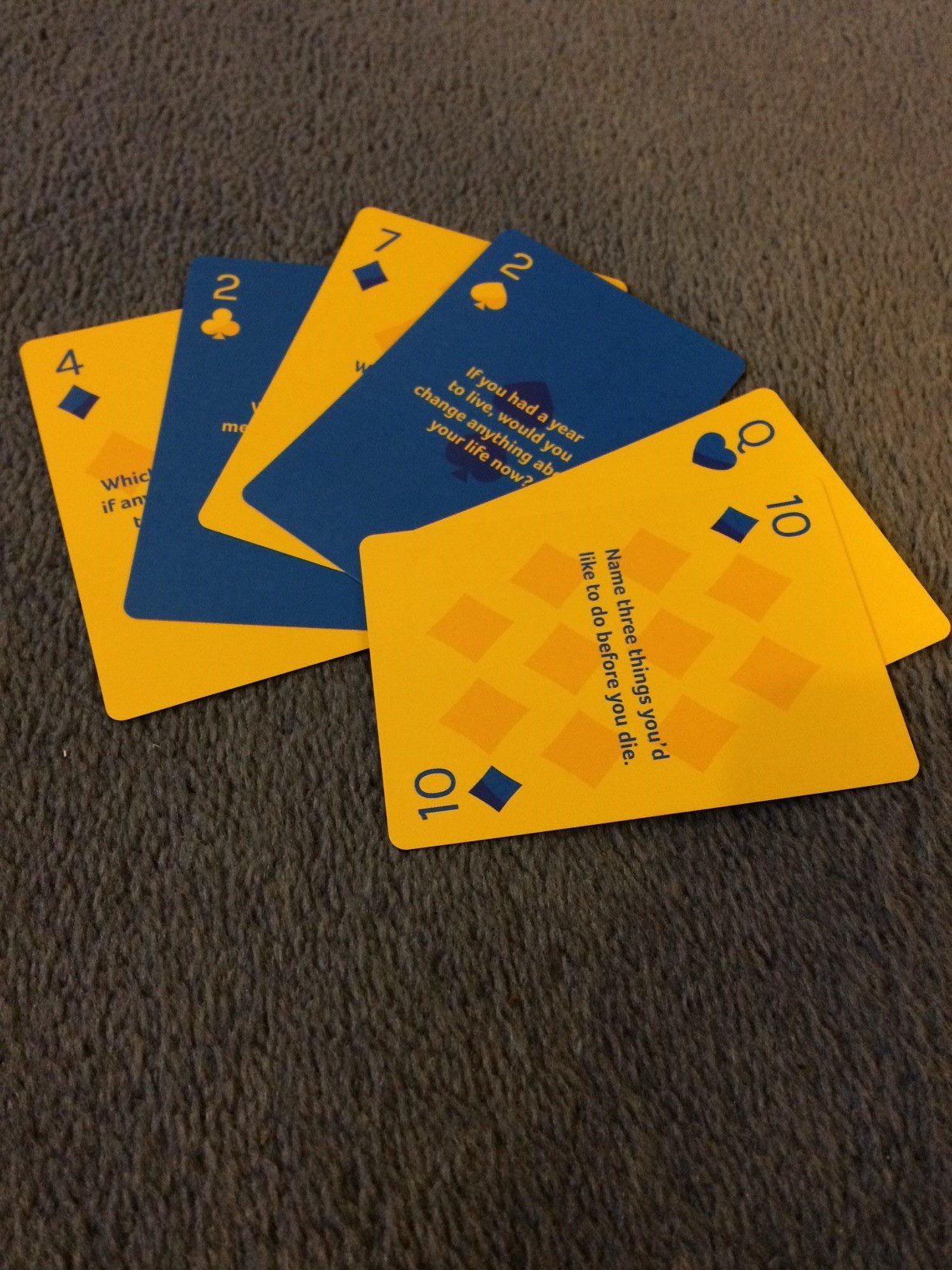 Some of the cards from Marie Curie’s ‘Talk About’ pack

Freeman Brothers Funeral Directors first opened in Horsham, West Sussex in 1855.   The company now also has offices in Billingshurst, Crawley and Hurstpierpoint, and in addition to arranging funerals, the team has a strong focus on community-based activities.  Following the end of 2019, Community Co-Ordinator Becky reflects on positive changes we could all make, and how funeral directors can better support members of the public…

The end of the year seems to be a point at which many of us take stock, and consider what has happened during the previous 12 months, and what the next year may hold.  We think about things we’ve achieved, things we’d like to change, and things we’d like to accomplish.  News outlets and blogs produce reviews of the year – we’ve done them too! – and the impact of these items tends to be lent even greater significance when we welcome the approach of a new decade, as has happened recently.

It’s traditionally a time of making firm resolutions for the year ahead – whether we decide it’s time to embark on a health and fitness regime, reconnect with friends we’ve lost touch with, learn a new skill or take on a physical challenge, or start visiting places we’ve always dreamed of going to, January often inspires us to make significant changes.

However, not all resolutions require us to make extensive lifestyle changes, or save diligently for the trip of a lifetime – we could decide that now is the time to have some important conversations that we’ve been putting off.  One topic which many people find difficult to discuss is death, and helping people to find these conversations easier is something that I’ve been doing throughout my time at Freeman Brothers so far.

During the last two years, I’ve come across and accumulated a variety of resources: from developing our ‘Big Deal, Small Talk’ leaflets and events, to giving talks at care homes and cancer support groups, I’ve heard many stories.  I’ve read a variety of articles about responses to death, and how death is portrayed in the media.  Of the resources I’ve come across, there have been some great ones launched by the Church of England, and whilst I find the content in these to be fantastic, they aren’t suited to everyone.  For those who may be interested, I highly recommend the organisation’s Grave Talk cards in particular, which you can find here.  Organising to chat as part of a group, such as via a Grave Talk event, can make things easier – I’ve facilitated at one of these events myself, and found that those who are more confident are able to help the conversation along for others who are finding the situation more challenging.  It’s also a great way to learn from others – group discussions allow us to hear ideas which we might not otherwise have heard about, and allow us to expand our own plans more fully.

Towards the end of 2019, Marie Curie launched their ‘Talk About’ campaign.  In addition to a series of adverts and some online publicity, the charity made packs of cards available, which are free to order and designed to inspire conversation.  I ordered a pack, which was swiftly delivered to the office, and I eagerly began to explore them.  I’m pleased that this resource is non-denominational, and it’s a different take on a theme which has already been explored several times.

Although the cards have prompts on them to facilitate thinking and discussion, they are also marked up as a traditional pack of playing cards.  The idea here is that they’re used to play a typical card game – and that these are therefore adaptable to a variety of group sizes, and also may be used for a single-player situation – and that the prompts are used when a given card or hand is played.  I think this is a great idea, that the cards are essentially dual-purpose, and that the prompts can therefore be accepted or passed over as necessary.

Unlike some other resources I’ve come across, the prompts on the ‘Talk About’ cards aren’t strictly categorised, but having looked through them, some are more factual and others more philosophical.  Prompts range from the fairly standard, ‘Where would you like your funeral to take place?’ and, ‘What role, if any, should faith or beliefs play in your funeral?’ to those which push the boundary a little further.  For example, ‘What words would you like on your headstone?’ and ‘Which of your body parts, if any, would you be willing to donate to science?’  The latter dovetails nicely with another current campaign by a different organisation: in 2020, the law on organ donation is changing in England and Scotland – adults will be considered to have agreed to be an organ donor when they die, unless they have opted out or are part of an ‘excluded group’.  The matters are slightly different, as in the pack of cards, the question is posed in the form of donation to medical science, rather than donation for use within another person, but it’s great that the conversation continues to be opened up.

Another card I particularly like is one which poses the question, ‘What’s the most memorable on-screen death scene?’.  I’ve since been trying to think which has impacted me the most, and I’ve come to realise that we often don’t see death itself in film and television, but rather the lead up to it and the aftermath (the way funerals themselves are depicted is a source of great frustration to us, as Abi has blogged previously!).

Some of the cards which struck me as more philosophical, and have given me pause for thought over the New Year period are ones such as, ‘What are the words you live by?’.  Some of my other favourites may be perceived by many people as issues which ought to be considered when making Bucket Lists, but again, these put me more in mind of resolutions for change: If you had a year to live, would you change anything about your life now?  What’s the one place you’d really like to visit before you die?  Name three things you’d like to do before you die.

With my own funeral plan already written and shared with my family, in case of it being needed in the near future, my focus for change is to consider some of these other questions… and to encourage the members of my immediate family who haven’t yet done so to let me know what their funeral wishes are!

The pack of cards offers two inspirational quotes: one from Dr Kathryn Mannix whose book, ‘With The End In Mind’ I very much enjoyed – ‘Talking about death won’t make it happen.  But not talking about it robs us of choices and moments that will not come again.’

The other is from Portuguese author, José Saramago: ‘The only time we can talk about death is while we’re alive, not afterwards.’

Whatever your resolutions are for 2020, I wish you all the best in achieving your goals.  And, if your resolution is to have those conversations about death, dying and bereavement, I’d be happy to help if I am able to – get in touch, or join us at one of our events during the year ahead.