Options and expectations for planning the funeral service.

Other decisions to make
After the funeral

Sometimes, attendees will follow the coffin into the service venue but it is perfectly acceptable to be seated first, especially if there are older attendees or in the case of inclement weather. The officiant will usually suggest you stand as the coffin is carried in.

The funeral director will have several staff present and these, along with the overall funeral service, will be supervised by a senior team member, usually called the conductor. They will: advise when it’s the right time to enter the service venue and to leave it later; check that the venue understands the requirements for music and other parts of the service, such as any visual tributes; check the officiant has all the information they need; make sure the grave has been prepared and everything is in order for that aspect of the funeral (if it is a burial); and generally ensure events unfold in line with the wishes that have been expressed previously. 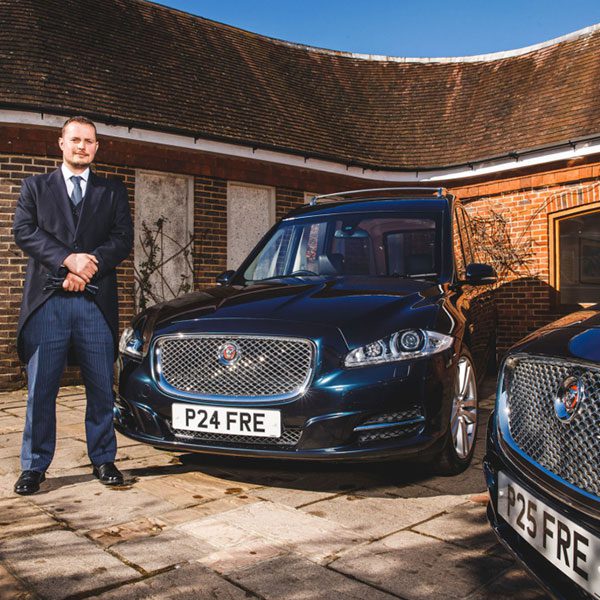 The funeral director will provide the right number of bearers to convey the coffin into the service venue: this number may depend on various factors including the dimensions of the coffin itself and the service setting as some venues may require that the coffin be carried a long way or over uneven ground, for example.

In the case of a cremation, the coffin will be placed on what is called the catafalque, which is a purpose-built platform, usually found at the front of the chapel so that it can be visible during the service. The catafalque will usually have curtains that can close around the coffin, if desired; any preference in this respect should be mentioned to the funeral director and the officiant, who is usually the person with control over the curtain mechanism. The coffin will usually not move until the congregation has left the chapel, but some crematoria may have an arrangement whereby it will be seen to move. It is important to note that, even if the coffin does move out of sight, this will not be directly into the cremator and there is no possibility of seeing the cremation process from the chapel.

The cremation itself usually takes place on the same day as the service, however the crematorium does have the right to postpone a cremation for up to 72 hours (known as ‘holding over’). This is incredibly rare and most crematoria give you the option to declare if you do not want this to take place, which ensures it is carried out on the same day.

The cremation takes place after the service has concluded and once the coffin and paperwork have been checked as part of the pre-cremation procedure. Each cremation is individual (cremators can only accommodate one coffin) so there is no possibility of cremated remains being confused with one another: all ashes are removed from the cremator area before the next cremation begins. If there is a wish to witness the charging of the coffin or the cremation process (for religious or other reasons) this can be arranged, but the crematorium would need to be advised in advance so they can plan for the cremation to happen soon after the service, preventing witnesses waiting for a lengthy period.

After the service, the funeral director will usually remove the coffin tribute (unless otherwise instructed) and place it with any other flowers in a designated place outside so that attendees can appreciate them in closer detail.

If there has been a service elsewhere prior to a burial, it is often assumed that the committal is for immediate family or those closest to the person who has died. This is not necessarily the case but it is useful for the funeral director and officiant to know your wishes in this respect: the officiant is especially important here as they are able to announce at the end of the main service whether or not everyone should then proceed to the grave. Equally, an Order of Service can convey your wishes through appropriate wording. 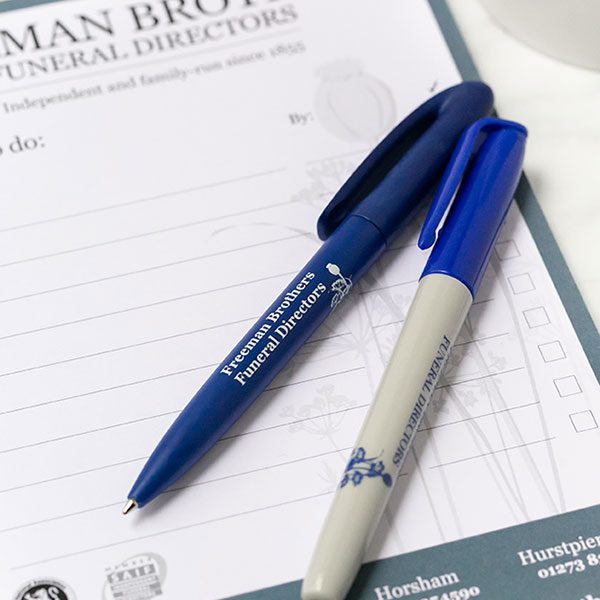 The Order of Service.

We appreciate a bereavement is a very difficult time and we are here to assist you in creating an Order of Service in memory of the person who has died. This information has been designed to guide you through the decisions you will need to make: please use the downloadable Order of Service form to record your wishes and bring it to the appointment you make to discuss the Order of Service, or provide this information to your funeral arranger by email.

Creating an Order of Service.

Discuss and agree the content for the service with the officiant and obtain from them a copy of the running order, or ensure they have sent this to us direct.

Prepare any pictures required. Either hard copies may be brought in for us to scan or digital files can be supplied on a memory stick or disk, when you return your order form, or emailed (depending on the size of the picture) to your funeral arranger.

Use our downloadable Order of Service form to make your decisions about cover design.

Once you have completed the form, please contact us to arrange an appointment with your funeral arranger to discuss your requirements. We will use the running order from the officiant (step 1) and your wishes to decide on the overall appearance. Please bring any photos (step 2), a copy of the running order (if the officiant is not sending this to us directly) and your completed Order of Service form outlining your requirements. You may also email your funeral arranger with all of these details, along with your photographs.

We will give you and the officiant an opportunity to proofread a draft and make any changes prior to printing. 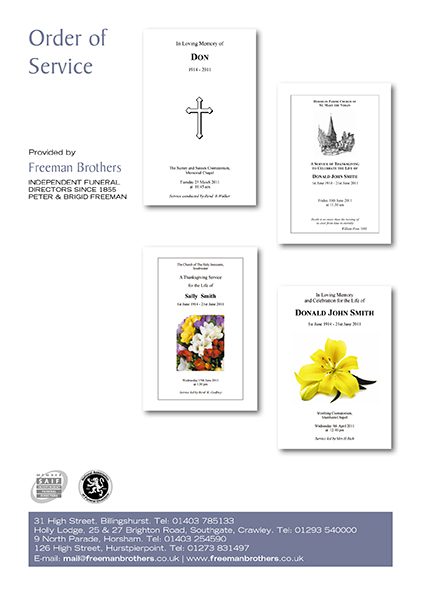 For more information on how to plan a funeral, please continue to After The Funeral or return to Other Decisions To Make.

Other Decisions to Make
After the Funeral

How much does a funeral cost?

It can be hard to know how much a funeral might cost, especially as third-party fees can vary considerably and are sometimes not included in our competitors' quotes. Our easy-to-use estimation tool takes all aspects of the arrangement into account, giving you a realistic view right from the outset, so there are no surprises. Additionally, our statutory information page offers further detail regarding our standardised pricing.